California State University Channel Islands (CSUSI) is a Hispanic Serving Institution (HSI) founded in 2002 and has two teams in the 2022 Winter Classic Student Cluster Competition. This team has selected the nickname “Don’t Panic”, which is damned good advice for a cluster competition and, really, for life in general, right? 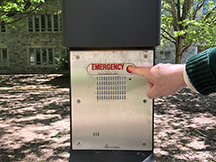 While students on the team are busy keeping things under control, they might visit the John Spoor Broome Library, which has an interesting tech connection. John “Jack” Spoor Broome came from a very successful Oxnard ranching family and was a highly regarded philanthropist in the area. He also owned a Homer Winslow painting which was the last Winslow in private hands. He put it up for sale, reasoning “I’m 80 years old, it’s time to let it go.” The buyer was none other than Microsoft founder Bill Gates, who paid over $30 million. Broome later carved off $5 million from that score and built the CSCI library that bears his name. Nice move.

We’ll update this space with new Team Don’t Panic content. This will include video interviews with the team and coaches, any contributions from the students, and things like that. Stay tuned….

Team CISU Don’t Panic:  Pizza and ice cream are on the menu for Team Don’t Panic from Channel Islands State University. This team is one of the most fun to interview, always happy and upbeat with a great sense of humor. I highly approve of their “Meatinator” protein-packed pizza choice and pounding it down with ice cream. However, they opted for plain vanilla without any toppings, which caused me a little concern.

During the interview we have some great banter back and forth. Team member Isaac plied me with questions about myself (my favorite topic), showing that he has done some research on me, at least where it pertains to my airline choices and TV favorites. Fun interview.

Team Don’t Panic Update:  The other team from Channel Island State University. We catch up to them just after the ORNL ML challenge. They were a little wrung out, having contended with the fiendish ORNL test. This team is always fun to interview, with a great sense of humor. The team is sitting in eighth place when we’re talking to them and ended up finishing the competition in eighth.

Cal State Channel Islands – Don’t Panic:  When we catch up with the team, just after their LINPACK/HPCG module, the team is under stress, but hasn’t panicked. They were definitive on that – there has been no panic. A couple of the team members are majoring in “Mechatronics” which is a combination of robotics, CS, and electronic engineering all devoted to making smarter things. When I first heard it, I thought it was that Lego stuff that you could program. Turns out that was something different. The team achieved good scores on all the tasks so far, nabbing them eighth place overall. In the video, we interview the whole team, which was a lot of fun, and advise one of their members on how to best declare his double major. A couple of other high points:  1) One student said he needs to see some more complexity in physics….2) Another said that he wasn’t sure HPC was for him because “..it seems like something for smart people….”