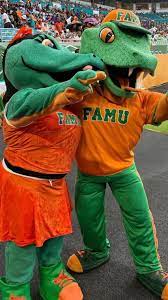 This will be the third Winter Classic appearance for the FAMU team. Last year, they were a tough competitor, scoring a #2 finish on HPL/HPCG, #2 on the NASA NAS-Par benchmarks, and #3 on the dreaded Pop Quiz. The team also won an informal award for running the most automated scripts, more than 5,000 on LINPACK/HPCG alone.

But this year they have an all new team and anything can happen. However, that team is top loaded with a masters student, three seniors, and a junior, so expect them to bring some intellectual power to the table this year.

The school mascot is Venom the Rattler, pictured above with his wife or something…we guess.

Learn more about Team Rattler in our upcoming interviews….

Florida Agricultural & Mechanical University:  FAMU competed in the first Winter Classic event last year and have one returning player this year. The team leader, Kawika, was the foundation of the 2021 team and is a time management ninja, as you’ll see from the video. Other than Kawika’s limited exposure to HPC last year, the rest of the team is new to the field. FAMU has put in the work and notched some pretty scores so far in the competition. They’re currently sitting in third place overall, just a handful of points behind the second place Texas Tech Red Raider team. FAMU has also set the world record in terms of the number of jobs submitted in the first two challenges with more than 2,000 HPL jobs and more than 4,500 HPCG jobs. Great use of scripting.