When we first lined up AWS to host the final computational event in the 2022 Winter Classic student cluster competition, we figured that by this time in the event that the drama would be over. One team would have pulled ahead and there’d be some distance between teams in the rest of the field. We were dead wrong.

Up until the AWS OpenFOAM Challenge, Tennessee State University had built a comfortable 50 point lead and looked to run the table on their way to the Overall Championship. The second to sixth place race was tight, with only 35 points separating the competitors, which was great. That’s until we opened up the spreadsheet with the OpenFOAM results.

The task for the twelve student teams was to run an OpenFOAM model the fastest while keeping the accuracy within a specified range. Accuracy, in this case, was the drag co-efficient on a racing motorcycle. Teams needed to turn in two results, one run on AMD CPUs in an AWS cluster and the other run on Intel fueled AWS instances.

The results shocked us:  Prairie View A&M, a previously fifth or sixth place competitor, absolutely destroyed the rest of the field with scores that were orders of magnitude better than the other teams. Take a look at the detailed AWS results below…. 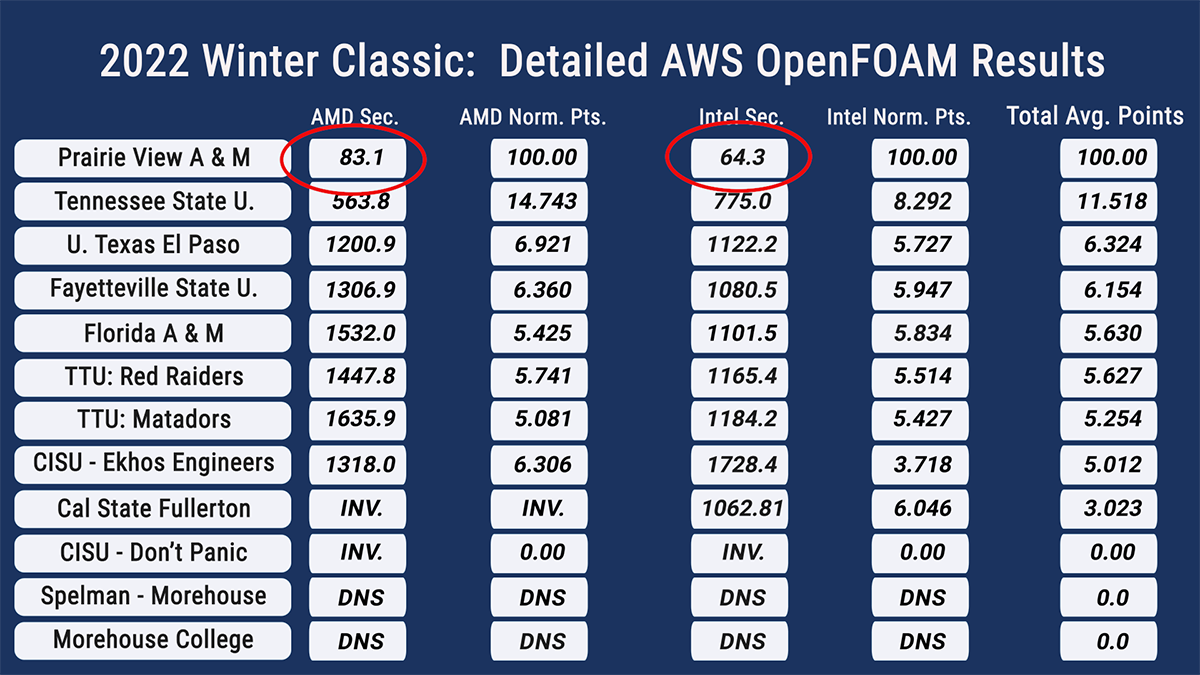 Measured in seconds, Prairie View turned in scores that were 6.8 and 12 times less than second-place Tennessee State University – who had scores that were overall twice as good as the rest of the field.

Our methodology for apportioning competition points is to normalize all scores to the best score and allocate points based on a 100 point scale. This means that Prairie View gets the 100, the next best team received 11.518 points, and so on down the list.

These results had a profound impact on the overall competition leaderboard. Here’s what it looks like now: 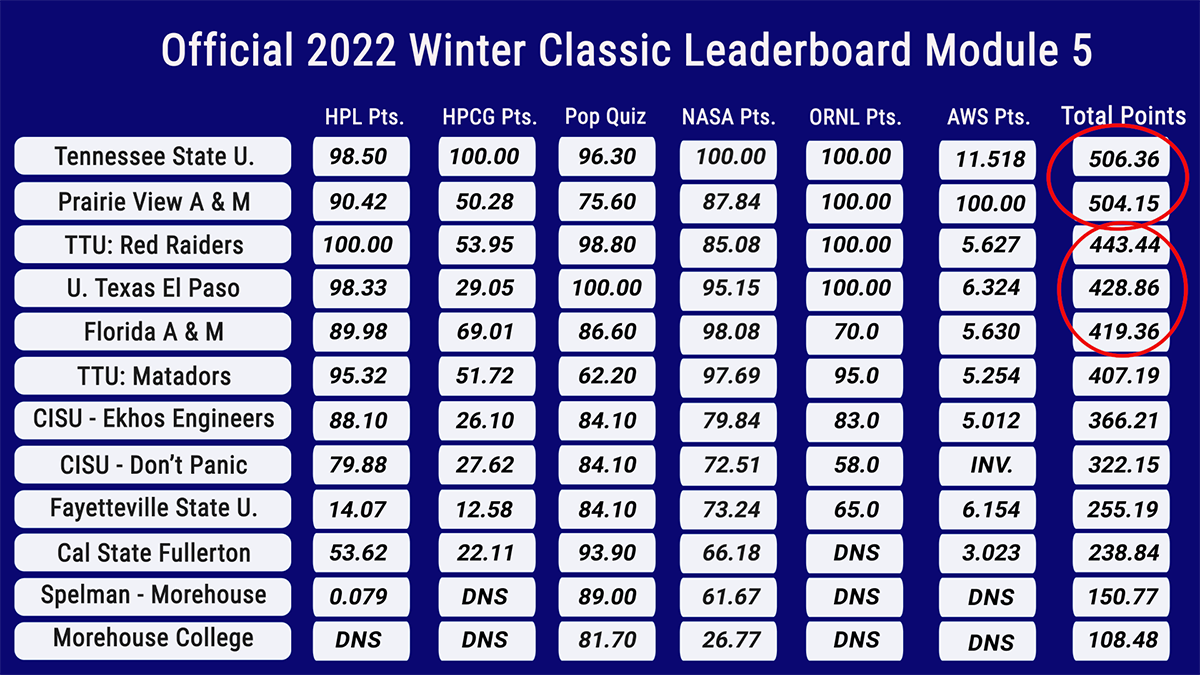 With their overwhelming win on OpenFOAM, Prairie View has vaulted themselves from fifth place into a breathtakingly close second. Only a razor thin 2.21 points separate Tennessee State in first place and Prairie View in second. The race for third place is still tight, with just over 24 points between third and fifth place.

The final event in the competition is the judges interview. This is where a panel of HPC experts grill the students on a variety of criteria including how well they understand HPC technology, the applications, and how well they worked together as a team and used what the mentors taught them. Like all of the tasks, the interview is worth a maximum of 100 points with the scores normalized to the top scoring team.

Prairie View has turned the competition for first place into a two horse race – them and Tennessee State. With an excellent interview, Prairie View could take the championship or Tennessee State could salt it away. While it’s possible, it’s difficult to imagine that the Red Raider team in third place could make up enough ground to overtake the two leaders. But they have their own battle to hold on to their potential third place finish, UTEP and FAMU could, with a great interview and a Red Raider stumble, sneak their way into third.

Addison Snell and I recorded a spectacular Studio Update Show where we’re, in a word, gobsmacked over the results we’re revealing. Check it out below….

If you want to learn how Prairied View blew the field away with OpenFOAM, take a look at our interview with the AWS mentors below. They reveal all and were highly impressed with the teams, but particularly Prairie View and how they pwoned OpenFOAM.

So what will happen with the interviews? Will Prairie View complete their Cinderella-like run and take home the championship trophy? Will Tennessee State hold them off and add a new statue to their trophy case? Can the Texas Tech Red Raiders defend their third place finish or will UTEP or FAMU snatch it from them at the last possible moment?

All of these questions will be answered at our 2022 Winter Classic Gala Awards Ceremony.